How people react to a crisis such as a pandemic is based on their genetic predisposition [ie: how they are ‘hardwired’], and environmental factors [eg: past experiences, previous exposure to stress, personal vulnerabilities and so on]. And while some will exhibit positive, and even heroic behaviours, others will exhibit negative behaviours such as fear, denial, helplessness, anger, stigmatization and violence. These negative responses were evident both during the Spanish Flu and during COVID-19, as shown in the examples below.

Presidents around the world suppressed news of the outbreak at first:

When the Spanish flu broke out, World War I was still going on, and presidents in Europe, the UK and in America felt announcing a pandemic would be bad for morale. In the US, President Woodrow Wilson felt it would affect the war effort.

Similarly, when COVID-19 broke out, President Trump suppressed the news of the COVID-19 pandemic, fearing it would damage the economy and break down his re-election chances. 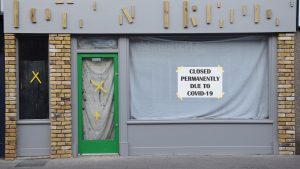 During both pandemics, people were advised to wear masks, take social distancing measures, and stay at home. Public transport was limited, and parades and festivals were cancelled. Public venues such as cinemas, restaurants, racecourses, businesses and factories were closed [some permanently], as were schools. 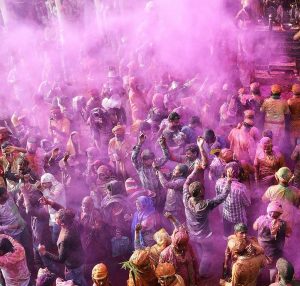 People railed against the closing of places of worship

The closing of places of worship during the Spanish Flu upset many people, who felt their source of comfort and spiritual guidance had been taken away from them, and letters to the editor voiced those complaints. Similarly during COVID-19, many people objected to having their place of worship closed even though some places of worship provided digital services. In India, people flocked to the streets to celebrate Holi, whilst in Iran Shiite hardliners unsealed holy shrines in protest of government closures, and in Rome Cardinal Angelo De Donatis changed his original decree to close churches, after being accused of putting ‘Christ in quarantine’.

The healthcare system was swamped. 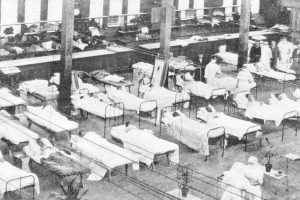 Melbourne’s Exhibition Building was transformed into a hospital during the 1919 influenza pandemic. Image: Museums Victoria

In the 1918-1919 Spanish Flu pandemic, many doctors and nurses were working in military camps abroad. And many of those, both abroad and at home, were getting sick. In addition, there were not enough beds in hospitals to cater for all the new cases, so halls and schools were converted into temporary hospitals. Medical students, retired doctors and nurses, and volunteers were called to help.

Similarly, during COVID-19 makeshift hospitals were constructed around the world. Using prefabricated modules, China built two new hospitals to fight the virus, one in just six days and the other in fifteen days. London built a 4000-bed temporary hospital in a massive convention centre, Spain turned hotels into recovery rooms, and exhibition halls, sports centres and libraries into field hospitals. Milan’s city fairground became an intensive care field hospital, and Melbourne’s Showgrounds became a 30-bed ‘urgent care clinic‘. And this time too, medical students, retired doctors and nurses, and volunteers were called to help. 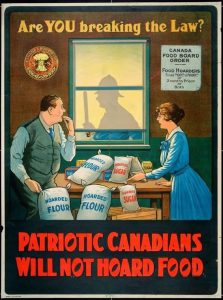 Hoarding – or accumulating things in excess of one’s immediate needs, is a natural human response during times of crisis or emergency, and it is a response also seen in many animals. During WWI and the Spanish Flu, people hoarded mainly foodstuffs such as tea, flour, sugar and Golden Syrup, even though governments imposed large fines on anyone found doing so. In 2020, though people did hoard foodstuffs and alcohol, the greatest item to be hoarded was toilet paper. There are a number of theories as to why toilet paper was the targeted item to hoard, but things got so bad that in Japan public toilets had the rolls chained to the dispensers, and in Australia only one roll was permitted per customer. 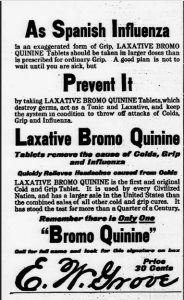 In the 1918-1919 pandemic, people thought opium, alcohol or quinine would cure the Spanish Flu. Others believed shutting all the windows and doors and boiling chillies, and allowing the fumes through the house would stave off the virus.

Similarly during COVID-19, quake cures abounded. The QAnon movement was urging people to drink MMS, effectively just a bleach. Other influencers advised burning essential oils, taking herbal remedies or large doses of vitamin C, or were using COVID-19 as an opportunity to sell overpriced hand sanitiser or fake testing kits, which prompted the World Health Organisation to publish ‘Coronavirus disease (COVID-19) advice for the public: Mythbusters’ on their website.

During both pandemics, some people objected to having to wear a mask. In Australia in 1919, masks were ridiculed and became known as ‘muzzles’ or a ‘nosebag habit’, while in the US people protested in the streets and an ‘Anti-Mask League’ was established in San Francisco. In  California, a man was shot when he attacked a police officer trying to make him wear a mask. 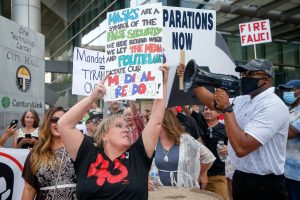 Throughout the world, protesters have demonstrated against wearing masks and other COVID-19 restrictions.  In Berlin, approximately 20,000 people from Germany and other European countries gathered. Some were believed to be members of the QAnon movement, others displayed banner praising Donald Trump and Vladimir Putin. In London, thousands gathered for the ‘Unite for Freedom’ demonstration against social distancing, mask wearing and tracing systems, calling COVID-19 a hoax, as did protesters in Montreal and Quebec.  Similar protests occurred in Dublin,  Spain, Rome, Australia and the US. In France, anti-maskers boycotted shops, complained to their local mayors and called for acts of civil disobedience, resulting in a bus driver in Bayonne [south-west France] dying after being severely beaten for asking passengers to wear face masks.

The Spanish Flu did not originate in Spain but in the US. On 4 March 1918, more than a hundred soldiers reported to the hospital at Fort Riley, Kansas, complaining of symptoms of sore throat, fever and headache. Soon, similar cases were reported in army camps and prisons throughout the country. As US soldiers travelled to Europe to fight on the battlefields of France, the virus quickly spread throughout Western Europe and beyond, then even further as soldiers returned home. Cases were reported in Germany, Russia, North Africa, China, India, Japan, the Philippines, Australia and New Zealand. In less than a year, it killed more than 50 million people – approximately 3 percent of the earth’s population. So why the ‘Spanish’ flu? Because Spain, as a neutral country, did not censor its press as it did not have to worry about it affecting its troops’ morale, and so was the only country to report on the disease – as a result, people believed Spain to be its epicentre.

And while COVID-19 did first emerge in Wuhan, China, the World Health Organization made it clear that the coronavirus is called SARS-CoV-2 and the disease it causes is called COVID-19, leading U.S. conservative politicians and influencers continued to call it ‘Chinese coronavirus,’ ‘Wuhan Coronavirus,’ ‘China Virus,’ and ‘Wuhan Virus’.

Sadly, blaming others for the existence of a plague or pandemic has been going on for centuries, often because of superstition and prejudice, and it frequently resulted in mass murder. To find out more, click here
#pandemic  #covid-19  #SpanishFlu