In this day and age, if you talked of smothering a parrot, eating blood-worms or bedding an Abbess, you’d likely be arrested, or at the very best be thought somewhat strange. But not so in the Victorian era, for then, ‘smothering a parrot’ meant drinking a glass of absinthe neat, ‘eating blood-worms’ meant eating sausages – and in particular blood-pudding – and an Abbess was a madame, or brothel keeper. But these terms are no longer used, because languages changes over time, and even within a particular time period, there are variations of language that reflect one’s position in society, one’s education and one’s background. Even in what we commonly refer to as ‘slang’, there are variations. 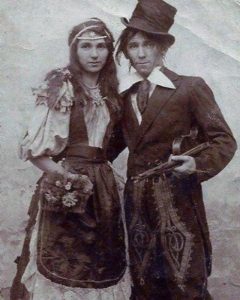 Cants, otherwise known as slang, or the jargons of specific groups used to exclude or mislead people, were common amongst the lower classes of Victorian English. Many people nowadays are familiar with Cockney rhyming-slang, where ‘scratch an itch’ means bitch and ‘hot beef!’ means stop thief! But there was also ‘boxing-slang’ – slang taken from the sport of boxing, an important sport at the time – with terms like ‘bruiser’, meaning a boxer, or ‘to do down’ someone, meaning to beat someone up. Romany slang – or the slang of gypsies – brought the terms ‘chiv’ or ‘shiv’, meaning a knife, and ‘voker’, meaning to speak. Tinker – or shelta – was a slang spoken by Irish travellers, and there was also Cockney back-slang, a secret language in which each word was pronounced as if spelled backward. So ‘yennep’ meant a penny, ‘a tol’ meant a lot, and a ‘reeb’ meant a beer.

So when researching Orphan Rock [Transit Lounge, forthcoming March 2022], it was important that the language used by Henry and his mother Effie, both living in Sydney’s slums, reflect their position in society, as well as their level of education:

‘You don’t look up to dick to me, you don’t,’ Effie said, looking Bessie up and down and frowning. ‘You sure you ain’t got no smallpox? I don’t want no smallpox in me ‘ouse.’

The term ‘not up to dick’ – meaning to be unwell – is no longer used, but in the late 1800s the term was common amongst the lower classes, so it would have been normal for Effie, a woman barely surviving in a rooming house in The Rocks, to use such an expression, and I found this term, and many others, in two excellent and crucial slang dictionaries of the time – A Dictionary of Slang and Colloquial English [1905] by John S Farmer and W E Henley, and A Dictionary Of Heterodox English, Slang, And Phrase [1909] by J. Bedding Ware [the pseudonym of Andrew Forrester, the British writer who created one of the first female detectives in literary history in 1863].

Here are other slang terms I found interesting: ‘poked up’ meant embarrassed, ‘mutton shunter’ or ‘blue bottle’ was a policeman, ‘chats’ were lice, a ‘popsy wopsy’ was a smiling, doll-like, attractive girl, and the ‘jammiest bits of jam’ was an absolutely perfect young woman, but a ‘gin bottle’ was a dirty, abandoned, debased woman generally over thirty, and near death. A ‘lackin’ or ‘lakin’ was a wife, a ‘tail’ or a ‘ladybird’ was a prostitute, and my favourite, if you described someone as ‘arf’arf’an’arf’, you meant he was drunk, that he’d had many ‘arfs’, or half pints of alcohol.

There were thousands of slang words of Victorian English that are no longer in use – they may have changed their form, or no longer be relevant today, or simply no longer be in fashion. And who knows which words used today, slang words such as ‘slowding’ or ‘hangry’ or ‘memek’, will one day be included in the dictionary, only to disappear again decades after their inclusion. #slang #history #booklovers #histfic #HistoricalFiction #OrphanRock